Here are some stories from Troopers currently operating in the field, and what it means for them to be a part of the 501st Legion.
Forum rules
Locked
2 posts • Page 1 of 1 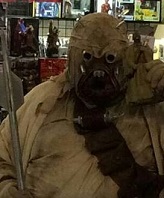 By now most of us know that Big Gulp went to the premier of The Last Jedi. What you may not know is the Dune Sea Garrison had 4 representatives at the premier. Christopher Gilb Rob Webb Mike Alvear and Scott Brant were all there, Congratulations guys way to go. Here is the part everyone will want to pay attention to. They got to attend because they were nominated for trooper of the month, 34 troopers were selected from the nominations to go. The next time you get that email asking for nominations for Trooper of the Month, think of these guys and nominate someone. You never know when an Opportunity like this will happen again.
You do not have the required permissions to view the files attached to this post.

Re: Dune Sea Garrison at the Red Carpet Premier

Return to “Why We Troop”