Here are some stories from Troopers currently operating in the field, and what it means for them to be a part of the 501st Legion.
Forum rules
Locked
3 posts • Page 1 of 1

Let's start by I love Star Wars, I always have. My husband is the one who wanted to do Cad Bane back in 2010 so he could be part of the 501st and set out to do it. Got it done and has loved being the character and he found out his talent at sculpting and creating Star Wars stuff has now become his passion. His friend, who lives in San Diego, wanted to do an Imperial Guard so he decided to be one with him and they needed an Emperor--me. I became this character in 2012 to support my husband and his friend and it turned out to be a pretty good choice. I never imagined how much of an impact it would have on other girls seeing the Emperor being played by a girl. I have had girls walk by all the other star wars characters and come directly to me as the Emperor. Being part of the 501st to help with granting wishes to kids in the Make-a-Wish Foundation is why I continue to do this and just bringing the love of Star Wars to people everywhere is also my passion. The transformation from me to Emperor looks so surreal that sometimes others have a hard time understanding that I can pull off this character. I love connecting to others in the Star Wars groups with the same passion as I do, and together we bring smiles to kids and adults alike. The friendships created with other costumers is very rewarding and together we can rule the galaxy. Umm, just kidding on that last part. So to those already in the 501st, I am very honored to stand with you in costume and troop. For those thinking of joining, it is one of the best things you'll ever do. Troop on!

Jana Maclellan
I am the Sith they are looking for.
SL11235
Top 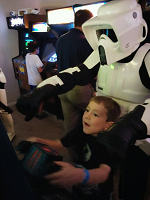 ..and pull it off you do and more. It's an honor to troop with you and I love it when you pull out the Emperor!
Peter Holzemer
TB-91005 [Lancer]
501st Pathfinders Detachment Armorer
Top

Return to “Why We Troop”